Are we ready for Jesus’ return?

The people of Jesus time were really convinced they were ready for the promised Messiah's arrival.

They had a picture of Gods long promised King in mind based on their hopes and aspirations for their nation. Perhaps he would be a great soldier to free them from Roman oppression?

No wonder they did not recognise the son of God as he walked among men.

God does things in his own way, and Jesus, the man he sent as promised, came to save far more than national pride.

He was a healer, a man of peace and kindness. A man driven by a single purpose, to free us from death. They were not ready for Jesus because they expected a different kind of Messiah or Saviour.

But are we so different to them? Are we ready for Jesus? Have we checked what the Bible tells us about him?

If we believe in Jesus, we will probably be aware that he is to return physically to this earth to begin ruling as God's chosen World Leader. So, if we in our turn are waiting for Jesus’ arrival, we had better try to be properly prepared. We do not want to be waiting for the wrong man!
This was all necessary to show us the way out of our own dead-end lives. God made Jesus sinless life and death wipe out our debt of Sin. Sins are what keep us in the grave when we die, so if God wipes them out for Jesus sake, we too can share in his resurrection.
​
Jesus was asked by the Temple Leaders of his day, to do something amazing and sensational to prove he was the son of God, they had no idea he was there to die for their sins, it’s understandable why Jesus reacted the way he did to this request for a sign. 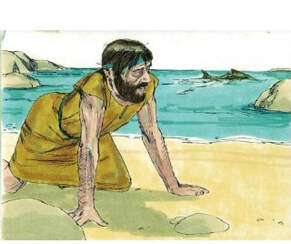 Jesus mentions the sign of Jonah twice in Matthew, and he is referring to the way Jonah’s survival for three days in the symbolic grave of the Great fish that swallowed him, brought about the salvation of the city of Nineveh when they became sorry for their lifestyle and were forgiven by God. They believed Jonah’s message and repented when he told them they were doing wrong. God forgave them and the city was saved from a terrible judgement. (Jonah 2&3)

Jesus Resurrection after three days in the grave was the ”sign of Jonah” given to their generation that Jesus referred to in the Gospel of Matthew, but not everybody realized its meaning.

Jesus came to provide the means of forgiveness we need. We must believe that Jesus rose from the dead. We must also repent from our life without God. We need to be baptised in water as Jesus showed us, so we can share in the eternal life that he gained from God.

The Basic facts of Christ’s Work and message are amazingly simple, to be saved from eternal death you need to start with...Belief,

Belief in Jesus sacrifice for us, belief in the need for repentance, and belief that our baptism is the doorway to a new life. In the three years he taught, all these things were taken up by his followers.
​
Hundreds of people had witnessed him risen from the dead, then he handed the work on to his disciples and went to live with God as we read in:

Now when He had spoken these things, while they watched, He was taken up, and a cloud received Him out of their sight.
10 And while they looked steadfastly toward heaven as He went up, behold, two men stood by them in white apparel,
​11 who also said, “Men of Galilee, why do you stand gazing up into heaven? This same Jesus, who was taken up from you into heaven, will so come in like manner as you saw Him go into heaven.”

Amazing events like that cannot be hidden. Despite efforts to silence the Apostles, the news spread quickly across the Roman Empire and was so well proven that it reached down through 2000 years to engage our own hearts.

We do not want to be like the faithless leaders of the past. We must prepare now, tomorrow could be too late. You may ask, why doesn’t God send His Son now when there is so much evil in the world?

9 The Lord is not slow in keeping his promise, as some understand slowness. Instead he is patient with you, not wanting anyone to perish, but everyone to come to repentance.
10 But the day of the Lord will come like a thief. The heavens will disappear with a roar; the elements will be destroyed by fire, and the earth and everything done in it will be laid bare.
God's promise is open to us all now. We can read His call on page after page of the Bible, the most dynamic book in the world. Consider it prayerfully, then respond. Let God speak to you. Let Christ live in you. Believe, repent, be baptised and let your whole life be converted to Him. There is no other way.
​
Jesus left this warning:

42 “Therefore keep watch, because you do not know on what day your Lord will come.
43 But understand this: If the owner of the house had known at what time of night the thief was coming, he would have kept watch and would not have let his house be broken into.
44 So you also must be ready, because the Son of Man will come at an hour when you do not expect him."
God grant that you and we will be ready for when Christ returns.